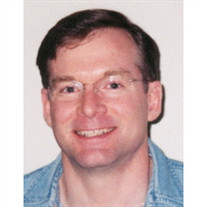 Darin Michael Stewart, as a passionate disciple of Jesus Christ, passed from "death unto life" (John 5:24) on October 11, 2021. Darin was born on March 17, 1964 in Owosso, Michigan to the late Robert (Bob) and Catherine (Cathy) Stewart. Darin often began each morning with a devotional from Our Daily Bread, which he kept on his dresser next to a framed copy of the Serenity Prayer: "God grant me the serenity to accept the things I cannot change, the courage to change the things I can, and the wisdom to know the difference." He worked hard in devotion to his family and in service to his church. As a military veteran, Darin dedicated 8 ½ years to his country from 1983 - 1991, with extended orders due to the Gulf War. Darin advanced to the rank of Staff Sergeant in the United States Air Force and earned placement in the Strategic Air Command (SAC) Elite Guard. Darin was gifted with extraordinary artistic ability which will live on through his drawings/paintings, props and scenery created for Central Church, and his amazing Christmas Village, which will be on display to delight others throughout the years to come. Darin is preceded in death by his parents, Robert Leonard Stewart and Catherine Dickenson Stewart. Darin is survived by his wife, Cynthia (Cindy) Stewart, daughter Maria Stewart, brothers Steve and Eric Stewart, sister Shari Stewart, sister-in-law Kathy Stewart, as well as nieces Tina Stewart, Crystal Wright, Emily Wilson, Khalie Stewart, Savannah Stewart, Natalye Stewart and nephew, Preston Parrish. A memorial service for Darin will be held at Central Church in Collierville, Tennessee on November 8, 2021, at 9:00 am to be followed by military honors and interment at 1:30 pm at Tennessee State Veterans Cemetery at Parkers Crossroads in Wildersville, Tennessee.

Darin Michael Stewart, as a passionate disciple of Jesus Christ, passed from "death unto life" (John 5:24) on October 11, 2021. Darin was born on March 17, 1964 in Owosso, Michigan to the late Robert (Bob) and Catherine (Cathy) Stewart. Darin... View Obituary & Service Information

The family of Darin Michael Stewart created this Life Tributes page to make it easy to share your memories.

Darin Michael Stewart, as a passionate disciple of Jesus Christ,...

Send flowers to the Stewart family.