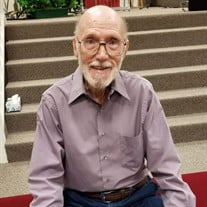 Curtis William Hall went to be with his Lord and Savior at 88 years old, on January 17, 2022. He was born July 23, 1933, in Brewton, Alabama, and resided in Pensacola. He was greeted in heaven by his parents, Willis Gordon Hall and Clara Lee (Madden) Hall, his wife of 56 years, Mary Lou Hall, and his son, Dana Hall. He was a cherished husband, father, and grandfather; a talented Steel Guitarist; and a faithful Christian. He served his country in the Army, owned and operated a TV repair shop, worked and retired as a Lab Technician at Monsanto, and played the steel guitar all the days of his life. He began his musical career by playing a Hawaiian guitar at the age of twelve. In 1954 he joined the Army and performed in the “Special Services Band” in Korea and Japan. After his return from his service in the Army, in the 50’s through the 70’s, he performed with many local groups, as well as famous performers including, Mel Tillis, Eddy Arnold, and George Morgan. Curtis also used his musical talents to teach others and to help local charities. He continued his musical career, playing 22 years for a local gospel group named, “The Workman Quartet”. In recent years, he played for Wesco Senior Center, and at his beloved church, Warrington Worship Center. In 2018, he was inducted into the “Mobile Country Music Association HALL OF FAME.” He is survived by his wife, Beverly Hall, and his children: Oberine Hall, Lamar Hall, Theresa Bonner (Rick), and Debra Adams (Ron); his grandchildren: Robert Morris, Jr., Robin Antone (Joe), Regina Green (Ted), Russell Morris, Curtis Hall, Rickey Hall, Danny Ruben, Jeff Abercrombie (Julie), Lavon Abercrombie (Amanda), and Chris Abercrombie (Andrea); 20 great-grandchildren; and 25 great-great-grandchildren. Services will be held at Warrington Worship Center (398 North Navy Boulevard, Pensacola, Florida, 32507) on Tuesday, January 25, 2022. Pastor George Hudnall, and Pastor and close friend David Joiner will be officiating. The visitation for the family will be from 11:00 am - 12:00 pm, the visitation for friends will be from 12:00 pm - 1:00 pm with the funeral service being held afterward. Interment will follow at Bayview Memorial Cemetery. Faith Chapel Funeral Home will be directing the funeral.

Curtis William Hall went to be with his Lord and Savior at 88 years old, on January 17, 2022. He was born July 23, 1933, in Brewton, Alabama, and resided in Pensacola. He was greeted in heaven by his parents, Willis Gordon Hall and Clara Lee... View Obituary & Service Information

The family of Curtis William Hall created this Life Tributes page to make it easy to share your memories.

Curtis William Hall went to be with his Lord and Savior at 88...

Send flowers to the Hall family.