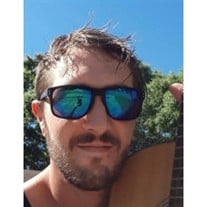 In Loving Memory of Christopher Charles Murphy beloved son, father, brother and boyfriend. Christopher Charles Murphy, known to many of his friends as Murph, was born a warm- hearted, charismatic, creative Leo. He was brought into this beautiful yet complex world by his loving and nurturing mother, Jean Stout, and his father, Timothy Murphy on July 26, 1989 in Hackettstown, New Jersey. Christopher moved with his mother and his step-father, Ronnie Stout, to the beautiful white shores of Pensacola, Florida in 1997. Chris courageously fought a long hard battle with opiate addiction. Chris's lengthy battle against the disease of addiction ended peacefully on December 11, 2021. Christopher Murphy attended Pensacola State College, formerly known as Pensacola Junior College, for the adult high school program and graduated with his diploma in 2006. He went on to receive a certification in the trade craft of welding from George Stone Technical College in 2013. Chris became a highly skilled welder earning many certifications. He would often say that welding brought a sense of peace to him. He worked at Austal USA in Mobile, Alabama Bell Steel and Patti Marine in Pensacola, Florida. One of Murph's biggest passions in life was music. He learned how to play the guitar when he was a teenager and continued to hone his skills. Christopher loved travelling and taking road trips with friends to attend music festivals. Chris was also an avid skateboarder in his youth and frequented many skate parks around Pensacola area. He also enjoyed competitive running and bike riding. Chris was a fan of The University of Alabama's football team. Murph was very talented and creative and loved to draw. Often creating caricatures of his friends that were highly raved about. He enjoyed being outside in nature and especially loved the beach. Chris loved amusement parks, especially roller coasters. Chris also enjoyed playing poker and would rave about his competitiveness. An animal lover especially of dogs, Chris along with his family, raised five dogs from pups. He was also an avid reader of books by Hunter S. Thompson books, Tim Dorsey and Richard Rhodes. One of the greatest things about Chris Murphy was his sense of humor. He had a dry sense of humor that not everyone understood, but if you did, he would certainly outwit you and have you laughing for hours. Even someone equally as sarcastic would have occasional doubts as to if Chris was joking or being serious, 9 times out of 10 he was cracking a facetious joke that probably just went over your head. He often thought about becoming a comedian so people could laugh. He was very knowledgeable in current events and he intrigued people with his realistic views of political faults. Christopher had two loves of his life and those lucky girls were his amazing mother Jean and his free-spirited daughter Madisyn. Chris was blessed with Madisyn Jae Murphy on February 12, 2013 and it was love at first sight from that moment forward. Madisyn's lively, care free spirit was certainly something that gave Chris hope on some of his darkest days. Christopher was a momma's boy through and through, the two of them shared an unbreakable bond and he loved her so very dearly. Chris Murphy's charm, outgoing nature, and contagious positive energy made it so that no one was a stranger to him. He was so easy to talk to, very compassionate, and always kind. He would often volunteer with The American Red Cross, Children's Home Society of Florida and Waterfront Rescue Mission. He is going to be greatly missed by so many people. His benevolent heart and eccentric spirit left an impression on many people. Christopher Murphy is survived by his mother, Jean Stout, and step father Ronnie Stout, his 8-year-old daughter Madisyn Murphy, his father Timothy Murphy, several aunts and uncles and paternal grandmother. We are asking that you please help us spread the awareness about addiction by donating to voicesriseup.org. The voices project is a grass roots recovery advocacy organization that is changing the way America sees recovery one voice at a time. End the silence, end addiction. Funeral services will be held at 12Noon on Saturday, December 18th, 2021 at Faith Chapel Funeral Home South located at 100 Beverly Pkwy Pensacola, Florida 32505. Beginning at 2pm there will be a celebration of life at 1225 Fort Pickens Road, Pensacola Beach. Faith Chapel Funeral Home North, 1000 South Highway 29, Cantonment, is entrusted with arrangements. You may express condolences online at www.fcfhs.com.

The family of Christopher Charles Murphy created this Life Tributes page to make it easy to share your memories.

Send flowers to the Murphy family.