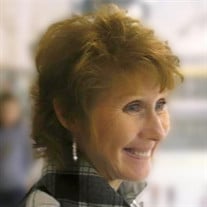 Christie Beaumont was called home to be with our Lord the morning of Sunday, April 3, 2022 in the comfort of her home. She was a devoted and beloved wife, mother, Grams, and friend. Her laughter and smile will be missed by so many. Christie was born on the 10th of June 1949 at St. Anthony’s Hospital, Oklahoma City, Oklahoma. She grew up in Oklahoma, Texas, California and finally back to Ft Worth, TX where she finished her childhood years. In November 1972, Christie married her soulmate, Keith (Beau) Beaumont, in Pensacola, FL and she started her life as a military wife, and eventually, a Navy momma. Christie and Beau had many adventures with the different stations they were located, such as Mississippi, Virginia, Puerto Rico, and Louisiana, but their heart was in Pensacola and they came back to it when it was time to retire from the Navy in the early 80’s. Christie had two daughters with Beau, Shelly and Sunny, whom she treasured. She was an excellent mother during all of the seasons of life, whether it was the long stretches of single parenting that come with being a navy wife while having young kids, or dealing with teenagers and all that it entails, to watching her kids grow up and leave the nest. She managed the balance with love and grace. Christie always ensured her daughters had a happy, loving and memorable childhood with values that they could teach and pass on to their own children. She was ecstatic when she had her first grand baby and each grandchild that came. She has 6 grandchildren, Lauren, Anna, Nate, Ben, Isaac and Avery whom she loved very much and thought the world of - she was a proud Grams and always bragged on and about her grandchildren. Christie’s pride and joy were her animals - her dogs to be specific. Throughout her years, she had so many special animals and her babies where just an extension of her. Christie spent her career working at Escambia Westgate and always had a special way of touching the lives of so many people with her magnetic personality. She retired from Westgate due to medical issues in 2008. Throughout the years after her retirement Christie continued to enjoy the deep friendships she made and always looked forward to get-togethers with the friends she made there. Christie loved to have fun and go fast, whether it was rollercoasters, cars, motorcycles or boats - the faster the better. She was an avid gardener; sun goddess in her earlier years but had to learn the hard way about the importance of sunscreen; reader; writer; and a devoted Christian whose daily life revolved around rejoicing in The Lord. On October 31, 2016, Beau retired from working and he and Christie started the retired life that she had always looked forward to. She loved being able to spend time riding on the motorcycle where they would spend countless hours taking journeys to sightsee the country side; other days she enjoyed spending time out on the boat with her puppies and Beau. Her backyard was her oasis, where she would sit, watch the puppies and throw a ball to them, read, and spend hours just chit-chatting with Beau or on the phone with her daughters and grandchildren. Christie is preceded in death by her parents, Fay Rita and Eugene Wayne Gillespie; Her sister and Brother in laws Glen Arnold; Milton Davis; Michael Bledsoe; Ann Davis; Monica-Jo Prestwood; Judy Howard. She is survived by her husband Keith Beaumont of 49 years; Daughters Shelly (Richard) Keller of Neskowin, Oregon; Sunny (Jason) Coleman of Cypress, TX; Grandchildren Lauren (Fidel) Barbosa; Anna (Nic) Fox; Nathanial Keller; Issac Keller; Benjamin Keller; Avery Coleman; Her brother Carter Gillespie; Brother and Sister in laws Jay (Edyie) Howard; Lea Beaumont; Buddy Prestwood; David (Shelley) Bledsoe; Nancy Stephens; Nieces and Nephews Jeff (Sandy) Howard; Janet (Glen) Kirchen; Jenny (Mike) Castner; Corey (Rachel) Prestwood; Derek (Katie) Gillespie; Isaac (Rebecca) Gillespie; Joey (Stormie) Gillespie; Ashley (Chris) Bledsoe Martinez; Jake (Tiffany) Bledsoe; Sarah Bledsoe; and other precious great nieces and nephews. A memorial service will be held to celebrate Christie’s life at Faith Chapel, 100 Beverley Pkwy, on Friday, April 8, 2022. Family will begin receiving friends at 2pm, service to begin at 3pm.

Christie Beaumont was called home to be with our Lord the morning of Sunday, April 3, 2022 in the comfort of her home. She was a devoted and beloved wife, mother, Grams, and friend. Her laughter and smile will be missed by so many. Christie... View Obituary & Service Information

The family of Christie Lynne Beaumont created this Life Tributes page to make it easy to share your memories.

Christie Beaumont was called home to be with our Lord the morning...

Send flowers to the Beaumont family.