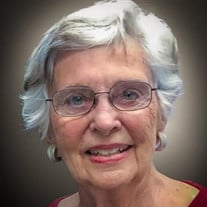 Betty Jo Bell spent Christmas in Heaven this year. When she was a young girl, she made plans to meet Jesus in person by accepting Him as her personal Lord and Savior. When she passed away this Christmas Eve at the age of 82, she was instantly in His presence. She began her new adventure heavenward from her home in Cantonment, Florida and had her closest friends, Cookie and Scott Poynter, there to see her off. Betty was born on January 9, 1939 in Defuniak Springs, Florida and was the eldest child of Gray and Geraldine Stifflemire. Her story began in Argyle, Florida where she was surrounded by both sets of grandparents and many aunts, uncles, and cousins. She lived there until her family relocated to Cantonment, Florida where she spent most of her formative years. She attended Tate School from elementary age until she graduated in 1956. Following graduation, she went to work and would do so off and on over the years. In order to make some extra money to make ends meet and to fulfill her desire to be around people, she balanced work with her family. She had three jobs that she was particularly fond of. She earned her broker’s license and worked for Better Homes Realty, sold jewelry at Daniels-Ellis, and worked in banking for AmSouth. Soon after Betty graduated high school, she met, dated, and married Ron Bell. Few people know, but she and Ron were married twice. Out of fear that they wouldn’t receive her father’s blessing, they eloped without telling anyone. After their return home, Ron asked for her hand and was granted permission to marry Betty Jo. On April 20, 1957, they tied the knot once again and celebrated that day as their official wedding date for the following 50 years. Because Ron served in the United States Air Force, they lived all over the world. In Florida, they resided in Mary Esther, Tampa, Valrico, and Pensacola. In Germany they lived in Wiesbaden and Birkenfeld. They also lived in Gallarate, Italy and North Bend, Oregon. Together, they loved traveling, playing cards, dancing, attending church, and supporting the Republican Party. Betty loved her family and friends and was loved in return. She was a strong woman, extremely disciplined, and had high expectations but was softened when her grandchildren joined her world. Betty is survived by her son, Jay Bell and two daughters-in-law, Laura Bell and Katy Bell Bremmer, whom she loved like her own daughters. She leaves behind six grandchildren, Brianna Galea, Brantley Bell (Michaela), Amanda Bell, Brock Bell, Gregory Bell, and Donovan Bell and three great grandchildren, Zane Galea, Zahra Galea, and Brady Bell. On the 24th of December, Betty Jo was welcomed to her promised home by her husband Ron, two sons Ronald, Jr. and Jeff, her grandson Brent, her brother Edward, and so many other redeemed souls that preceded her in death. There will be a celebration of Betty Jo’s life at 1:00 pm on Saturday, January 8th at Faith Chapel Funeral Home North, 1000 South Hwy. 29, Cantonment, FL. 32533. ph. 850-937-8118. In lieu of flowers, a donation in Betty Bell’s name can be made to Northwest Florida FCA, 4900 Bayou Boulevard Ste. 212, Pensacola, FL. 32503. For those unable to attend, there will be a livestream of the service. To view the livestream, enter Faith Chapel’s website at www.fcfhs.com. Enter Obituaries, click on her picture, then click webcast. Faith Chapel Funeral Home North, 1000 South Highway 29, Cantonment, is entrusted with arrangements. You may express condolences online at www.fcfhs.com.

Betty Jo Bell spent Christmas in Heaven this year. When she was a young girl, she made plans to meet Jesus in person by accepting Him as her personal Lord and Savior. When she passed away this Christmas Eve at the age of 82, she was instantly... View Obituary & Service Information

The family of Betty Jo Stifflemire Bell created this Life Tributes page to make it easy to share your memories.

Betty Jo Bell spent Christmas in Heaven this year. When she was...

Send flowers to the Bell family.