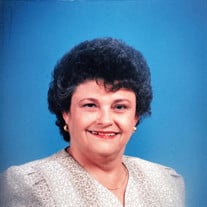 Alma Catherine Brown Hendrix, aged 83, stepped into the arms of Jesus on Friday, Feb. 18, 2022, after a seven-month battle with cancer. Cathy was born to Ike and Ethel Upton Brown on May 16, 1938, in Eliska, Alabama. After graduation from J.U. Blacksher High School, Cathy moved to Molino, Florida and began working at Chemstrand. While living in Molino, she met the love of her life, Donald Hendrix. They were married on Feb. 16, 1957. Cathy was church secretary at Highland Baptist Church for several years. She then began working for the Escambia County School System and retired after 33 years. She and Donald enjoyed many years traveling around the United States and Canada in their motorhomes. Cathy was a long-time member of Highland Baptist Church where she served faithfully for many years. Cathy had the gift of hospitality and always made any occasion special. She was kind, generous, and gracious, and she loved spending time with her grandchildren and great grandchildren. Cathy is preceded in death by her parents, her brother Charles Vernon Brown and her sister Sharon Brown. She is survived by Donald, her husband of 65 years; her daughter Janice (Joe) Roman and her son Garry (Paula) Hendrix; four grandchildren, Lindsay (Nicholas) Davis, Rebecca (Logan) Szuch, Michael Roman, and Jacob Hendrix; and five great-grandchildren, Donovan Szuch, Connor Davis, Emma Davis, Norah Szuch and Piper Jane Szuch. She is also survived by her sisters, Joyce (Eric) Frye, Margaret (Charles) Fulton, Mary Sue Childers, sister-in-law Jeanette Brown, cousin Martha Jane Nash and many nieces and nephews. Pallbearers will be Michael Roman, Jacob Hendrix, Nicholas Davis, Logan Szuch, Roger Brown and Warren Roberson. The family wishes to thank Dr. Owera, Nikki Kelly and the entire staff at the Woodlands, as well as the 4th floor staff and Covenant Care at West Florida Hospital for their care and compassion of our wife and mother. In lieu of flowers, please consider a donation to The American Cancer Society.

Alma Catherine Brown Hendrix, aged 83, stepped into the arms of Jesus on Friday, Feb. 18, 2022, after a seven-month battle with cancer. Cathy was born to Ike and Ethel Upton Brown on May 16, 1938, in Eliska, Alabama. After graduation from J.U.... View Obituary & Service Information

The family of Alma Catherine Hendrix created this Life Tributes page to make it easy to share your memories.

Send flowers to the Hendrix family.